Are you looking for some fun facts about worms? We have a huge list below with nothing but worm facts for your knowledge or a school project.

Are you looking for some fun facts about worms? We have a huge list below with nothing but worm facts for your knowledge or a school paper.

Worms play an important role in creating rich soil that plants feed on to help them grow strong and bear lots of fruit.

This soil is called "worm castings", or in other words, "worm poop". It's called castings because the worm casts out its poop from its body.

Now, you just had your first fun facts about worms.

Worms do not have eyes but they posses what's called "receptor cells". This let's them know that they are in or too close to light. They don't like the light and will die if left in the sun light too long. They feel around with their sensitive skin and hairs on their body.

Worms do not have lungs. They breathe through their skin through the transfer of oxygen absorbed by their skin. Since they don't inhale they must remain wet at all times so the transfer of dissolved oxygen can take place. They coat themselves in mucous especially in dryer conditions to keep from suffocating.

Not if they take a bath. Ha Ha! ;-) No. They have chemoreceptors that enable them to taste through means of chemical stimuli. Remember they cannot breathe therefore they cannot smell.

Since I was joking about a bath, as a matter of more fun facts, the red wiggler in Latin is called Eisenia fetida.

Fetida means nauseating, having a rotten or offensive smell, but honestly though, I've never even noticed much of a smell from them at all.

No, but they do have a mouth. Since they don't have teeth they suck food through their mouths by the use of a powerful pharynx.  They have a gizzard much like a chicken and it helps them grind their food. This is why it's important for them to swallow minerals made from stone to help grind the food.

5. What's the ring in the middle of the worm?

This is called the clitellum (also called a saddle) and is actually located closer to the mouth or anterior end of the worm. The clitellum is responsible for producing the cocoon which will hold the embryo. This is where baby worms come from.

6. How many hearts do worms have?

7. What are the little hairs called on it's body?

These little hairs are called "setae". These bristles enable a worm to cling to the walls of it's burrow and to move around easily on the ground or up a wall. That's why it can be so difficult to pull them out of their little holes. These tiny hairs are like Velcro. Okay onto more worm facts!

8. Can worms reproduce on there own?

9. How do worms Reproduce?

Worms find each other usually in moist conditions where food is abundant. Conditions must be just right or worms will not reproduce for fear that their babies will not survive.

Worms face each other in a juxtaposing position.

This means side by side but facing different directions.

During this position they exchange or transfer semen packets from one to another.

10. How are the cocoons created?

When it comes to worm facts, this is probably the most difficult to explain as well as visualize but here it goes anyway.

As the clitellum (thick band) slides forward it picks up ova from it's ovaries then picks up the semen packet . Thick mucous is produced by the clitellum during this process. It contains a nutritious substance to sustain the babies throughout the incubation period.

The babies are protected fairly well inside the cocoon. Cocoons can withstand the extreme elements of nature.

This is why composting worms that live outside can make it to see spring while the adults will die if it gets below freezing.

Depending on the species of worm the cocoons are usually the size of a grain of rice or slightly larger.

Well it's a given, of course, that adults are bigger, but the only way to tell the difference between a young worm and an adult worm is by the clitellum.

If a worm has a clitellum (the thick band or ring) then you know that it's an adult.

Find out about Soil Super Heroes in the Bonus Section! 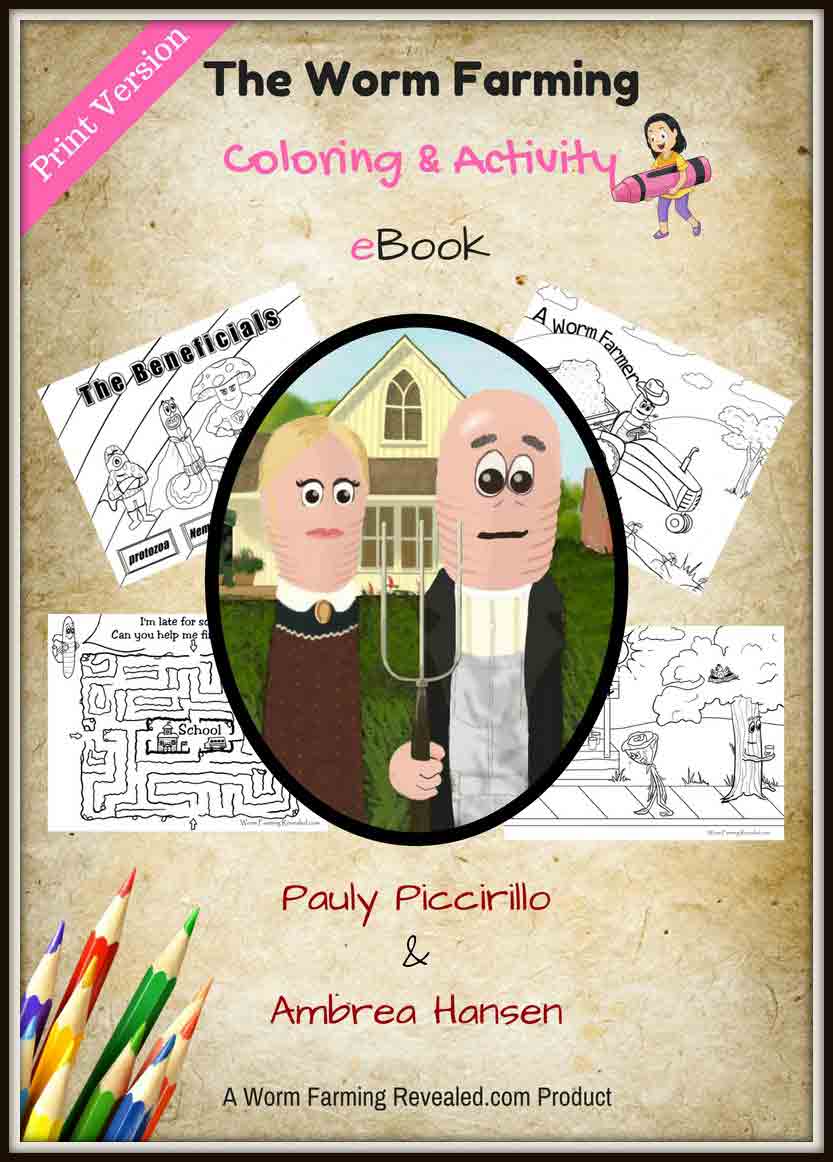