The worm anatomy might be boring to you and you're probably considering skipping this section. No problem! Go ahead, but once you're feeding your worms and harvesting your worm castings, it starts to eat at you a little bit and then more and more. So, I promise you'll be back just "squirming" to know what's going on inside those little worms.

Now that you're familiar with a few kinds of species let's open one up and see what makes it tick. Below is an illustration that you can refer to as we go along in the study.

You can also watch the video just below. 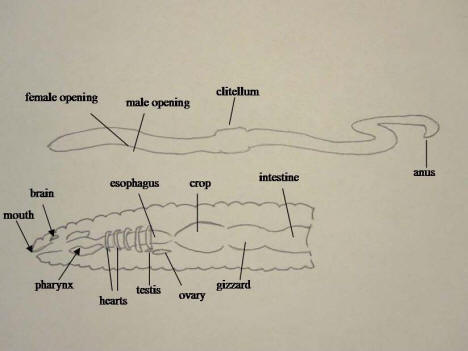 To understand a worm anatomy and physical functions it is also a good idea to understand its purpose and function in nature. It truly plays a huge role in the creation and design of our ecosystem.

A worm has three major duties in life eat, poop, and mate.

Not necessarily in that order:) The worm has a pointed head and a slightly rounded body. The rings on its body are called segments.

Earthworms have no protruding body parts making the worm very contour which enables them to pass through the soil with ease and to also squeeze in between tiny cracks. Bristles called "setae" on the body move back and forth allowing the earthworms to crawl.

The Digestive Tract
Earthworms have a very long digestive tract that runs the whole length of their body. The food enters the mouth by means of its muscular pharynx and is passed through the esophagus.

The food then moves to the crop which stores the food before entering the gizzard. Once in the gizzard it is then pulverized by the aid of special bacteria and tiny stones the worm ingested through its mouth.

Did You Know?
Worms have a gizzard much like a chicken and it is important when feeding your worms that you add a little outside dirt to the mix. Ground minerals would be best. Ground eggshells or Agricultural lime is easy to come by. They don’t need much, about a tablespoon at a time per 1 sq ft.

Like chickens, worms can't chew, so they swallow their food whole and then completely depend upon the gizzard to chew/grind the food for them. If you have any eggs you can also crush the eggshells to a powder with a rolling pin or hammer and throw it in with the food. Worms don't actually take bites out of their food.

They wait for bacteria to break down the decaying matter then slurp up the bacteria and other microorganisms. Think of it like ice cream in a bowl. As it slowly melts you can suck it up through a straw.

If you like these fun filled facts then check out the rest of the
fun facts.

It detects light using light-sensitive tissues mostly located near its head. In fact when you see worms dead on the ground after a rainstorm it's not because they drowned but rather had too much exposure to the sun's ultra violet rays. This concludes the worm anatomy section.

Go to Worm Reproduction Next

Return from Worm Anatomy to Beginning