Brown Thumb Green Thumb Chapter 1 is available as a test drive. Click the back button to see more of the book.

I need to begin by discussing the life cycle from seed to plant, to its last dying day.

In order to feed, water, and nurture the plant, using natural methods, we have to understand the entire process and its inner workings. We’ll go over each component of the plant and its process. This is a must before we even think about applying the Brown Thumb Green Thumb (BTGT) theorem.

You may want to skip this chapter, but you’ll probably come back to it. Like a kid learning how to drive, s/he doesn’t care about all of its inner workings, they just want to get behind the wheel and go. However, If the car breaks down, they won’t know what to do to get back on the road again, and if you don’t understand it, you can’t fix it. This could be as simple as changing a tire or replacing a fuse in a car on the side of the road.

This is important in order to have a thriving garden. Plants don’t have a brain and cars don’t either (relatively speaking). WE are the brains behind vehicles and plants.

Plants only react to the environment they grow in. A car only reacts to the way we control it. We convey to the plants in the garden how we want them to grow by where we place them, what we feed them, how we water and prune, and so on. BTGT is not a theory I created. It’s what I’m calling my perspective of nature and methodology for growing plants.

Like I said in the intro, everyone has their way of growing. I hope you get their perspective as well as mine. I’m only writing and sharing because I know the frustrations and struggles you have, even if this book only serves as one piece of the puzzle you’ve been looking for.

Pay close attention and write notes if you need to, because this process will play a big role in how we prepare, feed, water, and maintain the plant throughout the growing season. I think you’ll be extremely excited to get started after reading this book and applying nature, like you see in the pictures below.

I’ll first begin by discussing the 6 cycles of plants, then add one more. Like every part of the plant, the seed is one of the most fascinating to me. It may not be seen from the naked eye, but the seed is actually an identical clone of the plant. It’s just in a much different shape, but all of its components are there. 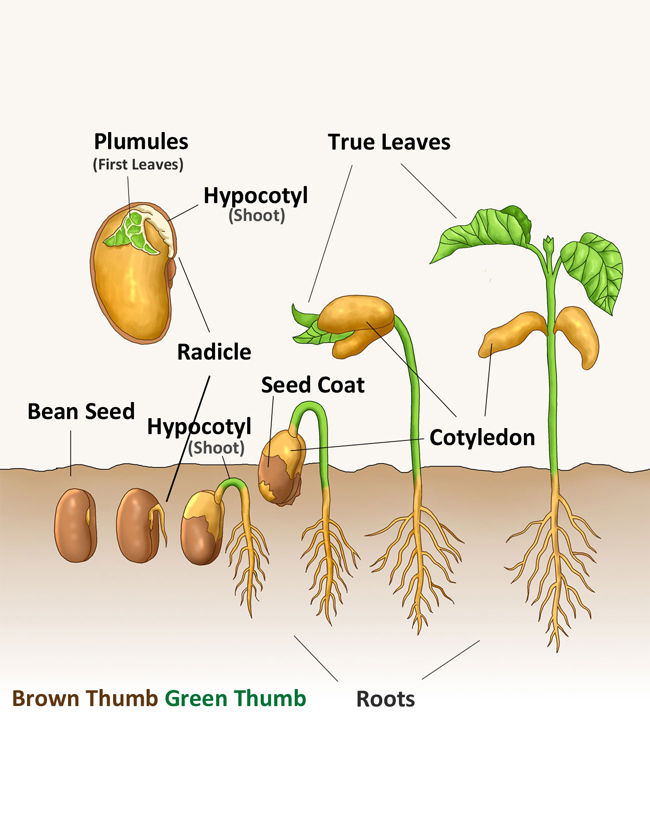 Why is this important? We want to nurture the seed like we would the plant that we want to grow. It’ll have all the same basic needs (light is not needed yet), whether you start the germination process from a standalone dry seed, to sprouting directly out of the body of the fruit (wet seeds).

Water can come in many forms of moisture. Water is needed to penetrate the hard outer shell (seed coat) and begins the process of moving food throughout the seed.

Food is the sugars that are stored within the seed and make up most of the seed. The two leaves that first emerge, are called dicotyledon (di – meaning two). This food source allows the seed to grow without light for a period of days, not that you should let that happen.

Note:
A seed planted too far into the soil has a higher risk of running out of food supply before it reaches the top where it’ll be in desperate need of photosynthesis.

Oxygen allows the germination process to begin. Without air/oxygen the seed will not germinate or grow at all. Oxygen is the fuel for the food and isn’t any different than humans, animals, or even cars. Plants need oxygen like they need carbon dioxide.

After the two cotyledons have emerged, and we see a noticeable stem (shoot or hypocotyl), it’s now a seedling.

A seedling is the vegetative components of full-grown plants without the flowers, fruit, or any other reproductive parts. It basically consists of:

There are other scientific identifiers, but they’re not relevant to this chapter.

A root sprouts from the seed, known as the radicle. It grows downward and horizontal (X axis is important for later) becoming elongated and sending out branches of roots.

These roots will grow tiny hair-like cells as it matures. The root hairs are about 15 micrometers in size, compared to human hair that is about 50 microns. That’s small enough to intake bacteria but filter out larger harmful microbes.

Root hairs perform most of the water absorption and are able to act as a filter due to their small size. It wouldn’t be good for a plant to suck up everything in its path. It does this to ensure that only beneficial microbes and nutrients are drawn in.

Phosphorus is an important element at this stage as it energizes rooting as well as flowering. A bigger root system will allow maximum nutrient uptake.

A shoot emerges almost as soft and tender as the root. As it grows taller and thicker into the stem, the outer vascular system dies and mainly becomes a channel way for water.

The dicotyledon that stored the initial fuel/food will usually turn yellow and wither away, sometimes falling off.

The first leaves shoot up from the cotyledon in anticipation to begin their main function of photosynthesis, using light and CO2 to produce food (sugar) for the vegetative growth process.

Without light there can be no plants. That’s half of the equation. For those that grow indoors, I’ll get into this discussion in more depth as we discuss the full spectrum of the rainbow. Light will be one of our biggest factors for plant growth and carbon fixation.

The vegetative or growth stage will be the most crucial phase as the plant is now beginning to grow rapidly by sending out more roots and root hairs vertically and horizontally as it searches out nutrients within the soil.

Which direction roots grow can depend upon where the available nutrients are located in the surrounding soil at that particular time.

Nitrogen will be an important element as the plant will be using plenty of it. This is especially important if growing plants that are indeterminate and only stop vegetating at the first or second sign of frost.

This is the stage that is vital for sunlight and soil nutrition as it expands its stems, branches, and broadens its leaves as wide as it can to collect as much solar energy as possible. Leaves catch/absorb as many photons as possible during the day in order to produce and store its food during this rapid growth period.

The food is the chlorophyll that is produced during the day and magnesium gives it green color. Without magnesium the plant wouldn’t be able to photosynthesis, create food (sugars), burn the sugars, thus creating oxygen.

Green seems to be the right type of color for attracting certain photon frequencies from the sun. Everything need to be function perfectly to get a good color of green. If there are deficiencies, less chlorophyll will be created making the plant a light green.

The leaves will reflect much of the light, rather than absorbing it. This can be remedied by adding the proper nutrients such as magnesium. Iron is a catalyst for magnesium.

Budding is when the plant is just beginning its reproductive stage. This is also the phase when phosphorus is in higher demand.  In some plants, the buds form in place of the leaves.

However, phosphorus will always be in demand if the plant continuously buds throughout the seasons and phosphorus isn’t confined to only the budding stages or areas.

These plants depend heavily upon insects to carry pollen from the male flowers to the female flowers, cucumber, melons, and zucchini are such plants.

During the flowering stage potassium will be in demand, but I want to point out that many food plants bud, flower, and bloom throughout their life cycle making potassium and phosphorus equally in demand. Ornamentals can vary.

I will be discussing mostly garden/food grown plants but the BTGT theorem still applies to most plants.

This is the phase in which the flowers bear their offspring in the form of fruit. The fruit will contain the seeds which, as we discussed earlier, have all the necessary parts for germinating into another plant.

The flower will die, and the fruit will become ripe to the point it can’t contain anymore sugars (due to many variables), cutting off all nutrients through the fruit stem. The stem dies and the heavy fruit falls off the plant to the ground as a means of the plant spreading its seed.

This is the most desired stage for us gardeners. Although every cycle is beautiful and fascinating to me, this is the phase that, in my opinion, could also be called the “rewarding” cycle.

All plants are different. Some stop growing/vegetating but continue to flower and bear fruit. Others continue to grow vertical and horizontal, produce buds and flowers, and bear fruit until the first frost. Some will continue to grow all year round if they’re impermeable to freezing temps, such as kale. What makes a plant grow its fruit or grow big fruit? We’ll get into this later, although some of the factors have already been discussed.

Because there are so many different plants and species, some of these cycles can be a little confusing.

Plants vegetate, bud, flower, and ripen all the way until death.

So, why should death be an important cycle of plants? Because without death there can be no life. I understand that it’s not part of the living cycle, but It’s still part of life. The ripening stage can be confusing as the plant can still be alive and producing during ripening, but everything ceases in death, save for the transferring of energy back to the earth.

Plant’s need to shed leaves, fruit, or its entire body in order to return to the ground to release all the carbon and minerals stored during its cycles.

Out of all living organisms on this planet, plants retain the most energy through sheer numbers. This includes the marine plants too, such as algae, seaweed, and plankton. Sunlight, carbon dioxide, and soil nutrients feed the plan turn into sugar and the plant grows. If the plant never died, the world would be overgrown in vegetation. However, this imbalance just wouldn’t be possible.

Some plants like giant sequoias live for thousands of years, but they still give back a little in the form of falling branches as they regenerate. The death process is extremely warranted for gardeners. We compost the plant’s stored energy to use for the next growing season.

Trillions of microbes, worms, and insects will feed on the carbon and return the dead plant into reusable food (humus) for the next seeds planted into the ground. This is a wonderful humus, called Living Soil. The cycle resets all over again.

Notice how similar humans are to the plant cycle.

They might have some varying differences but it’s remarkably interesting how similar living things are to each other.

Go To Next Chapter (chapter #3)